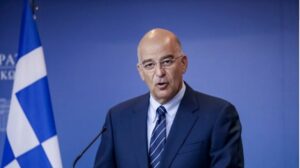 The General Secretary of the Greek Ministry of Foreign Affairs summoned the Russian ambassador in Athens for explanations regarding the expulsion of eight Greek diplomats from the diplomatic and consular authorities in Russia.

According to the Ministry of Foreign Affairs, the General Secretary emphasised that the Russian reaction was disproportionate compared to the measures that our country had announced against certain Russian diplomats, who had been declared personae non-gratae, as they had demonstrably displayed actions that were not consistent with their diplomatic status, in accordance with the provisions of the 1961 Vienna Convention on Diplomatic Relations and the 1963 Vienna Convention on Consular Relations.

On the contrary, according to the same announcement, the expulsions of the Greek diplomats have no justification, other than acting as disproportionate retaliation. It was also underlined that the aforementioned Greek diplomats in no way violated the Vienna Conventions.

Turkish President Erdogan continues to provoke: “We do not wish to go to war with Greece, but it does not keep its promises”

PM Mitsotakis: I am not interested in a psychoanalysis of the Turkish political leadership

Nikos Dendias: Only matters Greece will discuss with Turkey is EOZ and sea-shelf