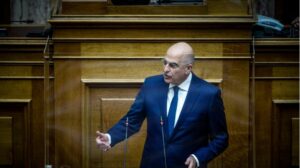 “The upgrade of the Turkish arsenal is a problem for Greece,” said Foreign Minister Nikos Dendias in the Plenary Session of the Parliament, commenting on US reports that US President Joe Biden is giving the green light for the procurement of 40 upgraded F16 jets to Turkey.

“From the information I have, what is coming out of the USA does not constitute a done deal. But upgrading the Turkish arsenal is a problem. Because Turkey has issued a threat of war against Greece and is violating our sovereign rights. Our position is clear: no! As is our position is clear regarding the German submarines in Turkey: no! This is our point of view and this is what we will formulate and I am sure that we will have the support of all the factions of the Parliament”, he said during the debate that is being held in the parliament for the new defence agreement between Greece and the USA.

Elsewhere, he referred to the overflights of the Turkish fighters, saying “Violations of our national airspace are completely unacceptable. They are a provocation to our national sovereignty “, he added,” you know the Turkish argument of overflights. It comes as a continuation of the Turkish accusations about the demilitarisation of our islands. The Turkish reasoning is that the Greek sovereignty of our islands is not valid if they are not demilitarised. On this matter, the United States has taken a clear stand, condemning the Turkish stance.”

Women in Spain to be given menstrual leave for severe pain

Bitcoin crashes below $27,000 level amid crypto meltdown and Terra losses

In a surprising move Erdogan invites expelled Greeks back to Constantinople