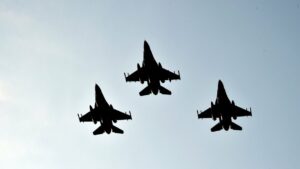 The Turkish Air Force carried out a series of provocations against Greece, as Turkish aircraft committed a total of 29 violations of the Greek national airspace over the Aegean Sea, while in two cases the Hellenic Air Force engaged in dog fights with the invading aircraft.

Four F-16 fighter jets – two of which were armed – and four CN-235 spy planes flew over the Northeast, Central, and Southeast Aegean on Monday.

Turkish aircraft also violated FIR traffic rules on six occasions. According to the Hellenic National Defense General Staff, the above aircraft were identified and intercepted in accordance with international rules, and the established practice.

The Greek answer to the Turkish propaganda about “Cesme”