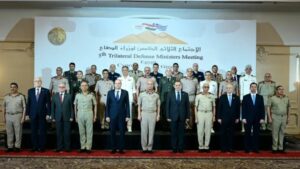 During their meeting, the Ministers reaffirmed their common will and determination to further develop coordination, cooperation, and joint efforts to enhance security and stability in the Eastern Mediterranean, as well as to create an environment conducive to the development and prosperity of their peoples.

The common goal of the three countries is the implementation of a long-term, coherent and effective strategic cooperation, in accordance with international law and the principles of good neighbourliness with all countries in the region.

In the Joint Declaration of the Trilateral Meeting, the Ministers condemned the unilateral actions that violate the sovereignty, national rights and territorial integrity of any country in the wider Eastern Mediterranean region and stressed the need for all countries to respect the international United Nations Convention on the Law of the Sea (UNCLOS) and all other relevant agreements.

Woman offered ‘sex services’ to paratroopers in UK base

The Gree Minister informed his counterparts about the delinquency and provocation of Turkey and the overflights of Turkish warplanes, stressing that these are completely unacceptable actions and Greece will protect its national and sovereign rights, with determination, against any intrusion.

Panagiotopoulos expressed his belief that the further development and expansion of the Trilateral Cooperation, with the participation of other countries in joint actions, with military means, personnel and observers, will assist in the pursuit of the Cooperation and will contribute to the security and stability of the wider area.

MEP Lagos to be extradited to Greece