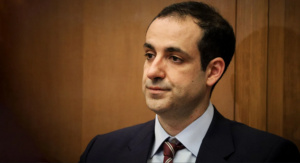 Grigoris Dimitriadis submitted his resignation from the position of Secretary General of the Greek Prime Minister. According to a statement from the Prime Minister’s press office, Mr. Kyriakos Mitsotakis accepted the resignation.

At the same time, according to government -s, the resignation of Mr. Dimitriadis is an attempt to disconnect the wiretapping scandal from the Maximos Palace. The same information -s point out that both the government and the resigned have nothing to do with the Androulakis wiretapping case.

However, as government -s report, in toxic political environment, things would be extremely dysfunctional both for the government and for Mr. Dimitriadis himself. In this context, in consultation with the Prime Minister, he submitted his resignation.

Mr. Dimitriadis, as informed by competent -s from the government, resigned because during six years alongside the Prime Minister, he received many attacks, aimed at Kyriakos Mitsotakis himself. With his move, he chooses to protect the Prime Minister, he does not want to create additional problems, the same -s note.

PM Mitsotakis at AmCham discussion: The pandemic was a dramatic catalyst for change in Greece