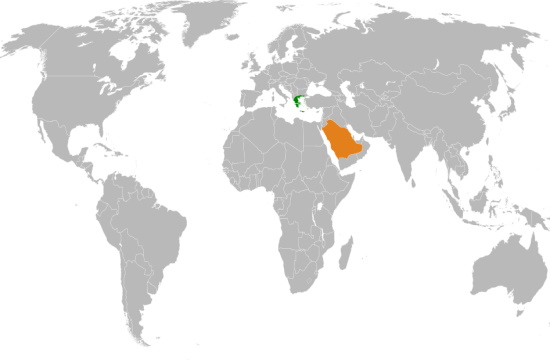 Some 17 bilateral agreements were signed across several sectors, including energy, defense, food, and culture. One of the deals, worth around $1 billion, was for an underwater data cable system

And he brought plenty of his own, including his own linen and cutlery and a 700-person entourage in seven planes – one kept empty and the other a hospital for only him just in case.

At his request, Greece’s New Democracy government provided him with 350 limousines – there weren’t enough in the country so some had to be brought in from Germany and Bulgaria.

The Greek newspaper Iefimerida said he had 185 bodyguards, including 70 to check cars and roads, and was so afraid of being poisoned he wouldn’t eat outside the luxurious Four Seasons hotel in Vougliameni where he stayed – except for a Head of State dinner at the Acropolis Museum.

A special order arrived for bulletproof glass panes, which were installed with a giant crane in the suite Bin Salman has taken over,” Iefimerida added, the Crown Prince taking no chances.

Prime Minister Kyriakos Mitsotakis – his government warmly embracing the Crown Prince and making no mention of Khashoggi – was seen smiling in their meeting and as the Greek leader escorted him on a personal tour of the Acropolis Museum and the Acropolis, the ancient home of democracy.

The irony wasn’t lost, with international media noting that Saudi Arabia carries out mass executions and has one of the world’s worst human rights records but all of that was set aside in the race for trade and oil.

The European Union and Greece are frantically trying to find replacements for Russian oil and gas that was exempted from sanctions over the invasion of Ukraine, and the likelihood the flow will be reduced, or cut off, this winter.

Some 17 bilateral agreements were signed across several sectors, including energy, defense, food, and culture. One of the deals, worth around $1 billion, was for an underwater data cable system.

The agreements were signed at the museum, something the Greek government confirmed had never been done before, singling out the Saudi Prince for even more VIP treatment, noted Middle East Eye in a report.

“This has never happened before,” said Development Minister Adonis Georgiadis. “We have never signed an MOU with any other country in the world in the Acropolis Museum and this is a gesture from our government, from our Prime Minister to the kingdom of Saudi Arabia to show how we feel that you are something very exceptional to us,” the British newspaper The Guardian reported.

“We are deeply honored that his Royal Highness Mohammed bin Salman decided to visit Greece as his first trip to an EU country since 2018,” Georgiadis gushed to Arab News before the visit.

“This is very important to Greece and very important to our relationship because we honor and admire his leadership, his vision for the kingdom of Saudi Arabia, and the way the kingdom is progressing to the new era of humanity in renewable energy, and new technology.” Khashoggi wasn’t mentioned.

Dev Patel breaks up fight in which a man was stabbed

Alimos: Video of the knife attack against a teenager (video)

Greece unveils guidelines on booster shots after infection with Covid-19