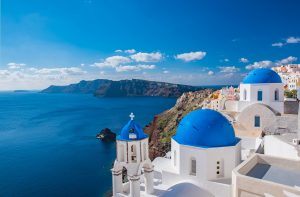 In a piece on Euronews site by Anthony Grant, Greece is lauded as the perfect choice for digital nomads.

You want a piece of Greece? If you’re the emir type you might think about snapping up an off-radar Greek island, or if you got hitched during the pandemic and it’s an unforgettable honeymoon you seek there’s always Santorini. For the rest of you, who station between your first job and retirement, there’s now another avenue toward a bona fide fix of all things Hellenic: the digital nomad route.

If working from your laptop with the Acropolis or Santorini’s volcanic caldera for a backdrop sounds pretty good, how about adding a 50 percent break on your income tax to sweeten the deal—is that the sound of your suitcase zipping shut?

Greece is working to bring more digital nomads to its islands
Thanks to legislation passed in Greek Parliament last year, starting this one digital nomads (that’s the trendy new label for remote workers) who come to Greece can take advantage of a 50 percent tax break for the first seven years. Ostensibly those are Greek taxes we’re talking about, which is something to consider. While a tax break on that order is certainly an enticement, how the overall tax ecosystem stacks up against that of your own country could still be a factor from the prospective digital nomad’s point of view. Still, the Greek mystique is pretty strong.

Greece is not alone, of course, in the drive to draw digital nomads. Consider that Newton’s third law of motion— for every reaction there is an equal and opposite reaction—also applies to people in motion. In other words, when due to the pandemic people have largely been stopped in their tracks and the global tourism industry is teetering on collapse its majors—entire governments included—will do cartwheels to recoup lost revenues. A recent headline in Forbes evoking a “war” for digital nomads may have veered into hyperbole, but a shift is undeniably afoot.

Minister: Phasing out of lignite a key decarbonisation action for Greece

The Greek passport is the 8th ‘strongest’ in the world

Greece – Abu Dhabi flight for Less Than One Euro!