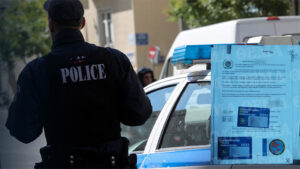 They were moving around in the center of Athens with Interpol IDs. They spoke five languages, had thousands of euros in cash and lived in an expensive house.

These are the three Turks who were arrested by Special Police Forces and were handed over to the Greek National Intelligence Service (NIS) as all the evidence shows that this is a very serious case on an international level on the trafficking of illegal migrants.

They themselves do not say much. One claims to be a Turkish policeman but the others keep their mouths shut refusing to even reveal how long they have been in Greece and how they found the money.

In the ghettos of  illegal immigrants in Athens, it was known lately that there were three strange guys pretending to be police officers and promising everything from travel documents to air tickets to anyone who wanted to enter or leave Greece illegally.

Turkey plans to send exploration rover to the moon by 2030

The cost for the “services” was 650 euros and it remains unknown how many and which foreigners were moved by the specific “Interpol agents”, where they departed from and where they ended up. Most importantly, it unknown whether among them there were people internationally wanted for involvement in terrorist and criminal cases.

Jerusalem Post: The EU must address the “Turkish problem” – Analysis