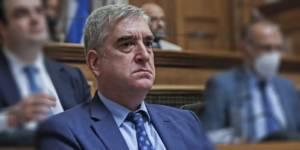 Panagiotis Kontoleon submitted his resignation from the position of commander of the Hellenic National Intelligence Service.

According to a statement from the press office of the Prime Minister, Mr. Kontoleon, resigned “after wrong actions found in the process of legal connections”.

According to government -s, Mr. Kontoleon had not provided the proper information for a legal wiretapping to the Prime Minister’s office.

The Secretary General of the Ministry of Foreign Affairs, Ambassador Themistoklis Demiris, is taking over as the new head of the NIS.

This follows the resignation of the Prime Minister’s General Secretary Georgios Dimitriadis.

PM Mitsotakis to return to Athens after death of Fofi Gennimata