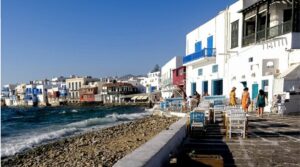 “For the European tourism industry, this summer marks a big comeback,” the article explains. “After 2.5 years of the pandemic, the desire for sun and beach is so great that the reservations exceed the expectations of the industry,” it points out. As the piece points out, some destinations are even expected to reach pre-pandemic levels in 2019, which was also a record year in many European regions. But the author notes that this year’s holidays have their price, explaining that high inflation, which in the eurozone reached 8.1%, makes will make summer vacations more expensive.

Greece, according to the author of the article, is ” the new rising star among the holiday destinations after the pandemic”. But as he cautions, prices,  for a four-star hotel are exploding. “If one does not pay attention to Mykonos, he will be shredded mercilessly: 79 euros a portion of grilled squid, 15 euros an espresso,” writes the columnist, who argues that despite the anger of many travellers for the prices on social media, so far, the desire for travel to Greece is rising.

“The brand Greece attracts. For Europe’s largest travel agent, Tui, Greece is one of the most popular destinations for 2022. The company wants to bring 3 million visitors to Greece this year “, with a large portion coming from Germany.

According to the Association of Greek Tourist Enterprises SETE, Greece is reaping the rewards of its good management of the coronavirus pandemic, its landscape diversity, and the tendency towards more individual vacations.

A new record is expected to be set this year in the number of visitors from the US. The major airlines, Delta, American, and United, offer more direct flights than ever before. According to the article, Americans are very welcome visitors, because they spend significantly more money than other foreigners.

As far as Turkey is concerned, all items are becoming more expensive due to record inflation, the German journalist said, explaining that the event is partially offset by the fall of the Turkish pound for foreign tourists.

“Holidays in Turkey are relatively cheap because the additional costs in the hotel industry are still low,” the article said.

In addition, the war in Ukraine could mean that significantly fewer tourists will come to the country this year from both Ukraine and Russia. Therefore, all-inclusive hotels in the Antalya region, in particular, face the challenge of giving their rooms to vacationers from other countries at lower prices. However, tourists should be aware that inflation makes other services more expensive. If you take a taxi from the airport to the hotel, you pay significantly more in euros than before. The same goes for car and fuel rental rates as well as for bus and boat tours.