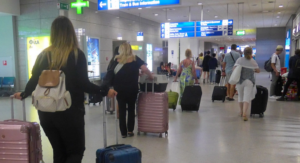 Airlines are preparing to lay on hundreds of thousands more seats between the UK and Greece next summer than they did in 2019 in the hope of a boom in foreign holidays as travel restrictions ease.

Jet2 and easyJet are among carriers that have added capacity to their pre-pandemic flight schedule for 2022. Jet2 said it had 1m more seats on sale between Greece and the UK than it had offered in 2019, while easyJet has plans to add about 500,000 more flight tickets to its schedule subject to space being made available at airports.

“Having met most of the tour operators and airline companies here in the UK . . . we are very, very optimistic about 2022,” said Vassilis Kikilias, the Greek tourism minister, speaking to the Financial Times at the World Travel Market conference in London.

Kikilias said that Greece was expecting 35 per cent more tourists from the UK next year than it had in 2021, equalling the record level of about 3.6m in 2019. He forecast that the “sun, sea and sand” season would start earlier than usual, in March.

The agreements between the airlines and the Greek government, with the tourism ministry helping to secure airport slots for planes in return for guarantees of inbound flights, are an indication of the travel industry’s faith in a strong bounceback in foreign travel next year.

The “deep blue” of Giuliano Cagli in the art gallery Expression