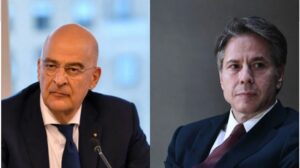 Foreign Minister Nikos Dendias is in Washington, DC, where he will participate in the third round of the Greek-US Strategic Talks and the signing of the Greek-American defence agreement.

Dendias, along with US State Department Secretary Anthony Blinken will sign the Second Amendment Protocol to the Mutual Defence Cooperation Agreement.

The Greek Foreign Minister is scheduled to meet tonight with the MP (Congressman) John Sarbanes, as well as with senator Chris Van Hollen while he will attend a reception with representatives of the Greek community.

Dendias will arrive at the State Department tomorrow, Thursday, where he will have a private meeting with his American counterpart Anthony Blinken, followed by extended talks. Then at 16:45, there will be joint statements to the press, followed by the signing of the Second Protocol Amending the Mutual Defence Cooperation Agreement.

The agreement will have a 5-year duration will provide the US Armed Forces the right to use even more military bases in Greece. According to “protothema.gr”, in addition to the facilities at the Souda naval base, the US Armed Forces will have institutionalised access to the Litochoro firing range, the Army Air Brigade in Stefanovikeio, Magnesia, and in Alexandroupolis, a gateway for the deployment of US troops stationed in Eastern Europe.

New Democracy is ahead with 16.4 points in new polls

Dendia’s answer to Cavusoglu: “My friend Mevlüt … Abandon your threats of war … Happy 2021!”