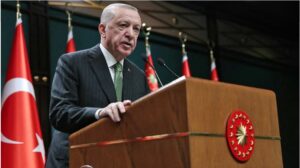 EU leaders are expected to condemn Turkey again for the latest escalation against Greece, according to the draft conclusions of the EU Summit to be held on June 23rd and 24th in Brussels.

“The European Council has expressed deep concern over Turkey’s repeated recent actions and statements. Turkey must respect the sovereignty and territorial integrity of all EU member states,” the draft said, according to Euroactiv.

Recalling its previous conclusions and the declaration of 25 March 2021, the European Council “expects Turkey to fully respect international law, to de-escalate tensions in the interests of regional stability in the Eastern Mediterranean, and to promote good neighbourly relations.”

Hundreds of thousands evacuated in China after severe flooding

After A Tumultuous Run In The White House, Sean Spicer is Ready To Talk Now

The Rafales have arrived in Greece (live feed-photos) (Upd.)

Spotting CNN on a TV Aboard Air Force One, Trump Rages Against Reality

A magnifying glass on dry grass was found on Mount Hymettus, one attempted arson inside Athens! (photos)