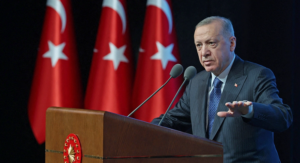 The Turkish president Erdogan described Turkey’s negative attitude towards the possible accession of Finland and Sweden to NATO, calling the Nordic countries “hosts of terrorist organizations” and recalled the attitude of the Alliance’s administrations towards the relationship of his country with Greece.

The Turkish president said: “We are currently monitoring developments in Sweden and Finland, but we are not in a positive mood. They made mistakes in NATO with the case of Greece in the past, its previous administrations, you know the attitude of Greece towards Turkey, with the support of NATO. We do not want to make a mistake. The Nordic countries are like ‘hostels’ for terrorist organizations”.

Sweden and Finland plan to hold talks about it with Turkey in Berlin on Saturday, the two foreign ministries said. Swedish Foreign Minister Anne Linde “will have the opportunity to discuss a possible Swedish candidacy” with her Turkish counterpart during an informal meeting of NATO ministers to which Sweden and Finland are invited, she told AFP.

During a press conference at the same time in Helsinki, Finnish Foreign Minister Peka Haavisto also announced his intention to “continue the discussion” with Turkish Minister Mevlut Cavusoglu.

Erdogan’s statement seems to have come as a surprise to Helsinki, as Haavisto has visited Turkey twice in recent months and Finnish President Sauli Niinisto spoke by telephone with Erdogan in early April. Following the phone call, Niinisto wrote on Twitter: “Turkey supports Finland’s goals.”

The joining of a new member to NATO requires unanimity. Thus, Turkey can block the candidacies of the two Nordic countries, which are expected to be announced in the coming days.

Erdogan also reacted to the “general permission” given by the United States to exempt from US sanctions the territories of northern Syria, including those controlled by the Kurdish YPG rebels, whom Turkey describes as a branch of the PKK.

“I do not know what to say about Biden. After seeing all the data and the exact statements of Biden we will reveal our position. First of all, the YPG is a terrorist organization and is the same as the PKK. It is impossible for us to accept this mistake of America. The United States has provided all kinds of financial support to the PKK terrorist organization, to all organizations in northern Syria. They sent equipment and ammunition by trucks. Now we hear about such things. Whatever we did in northern Iraq, we will continue to do in northern Syria, whether it is the PKK or the YPG. We can not afford to turn a blind eye to terrorists. We say this in countries that seem friendly. You are wrong, take your steps correctly. We will analyze it to them in our future meetings,” said the Turkish president.

On the same subject, Mevlut Cavusoglu reacted strongly yesterday, stressing that the lifting of US sanctions on territories controlled by YPG rebels in Syria is an attempt to legitimize a “terrorist group”. At the same time, he characterizes the latest US move as “biased, without objective criteria”.

TrainOSE: National train schedules change in Greece as of May 15

Confrontation between Dendias & Cavusoglu at the press conference

How the Greek revolution made the modern world – Analysis

How do you catch monkeypox and how easily does it spread?