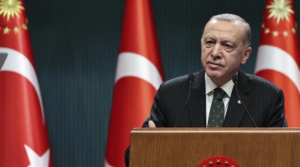 Recep Tayyip Erdogan had a meeting with the European ambassadors in Ankara on Thursday.

The Turkish president once again accused the EU of “strategic myopia”, spoke of “push-backs in the Aegean” and “ignorance of the rights of Turkish Cypriots”, but on the other hand appeared in favor of dialogue with Greece to resolve disputes between to the two neighbors.

“The EU did not take significant steps last year on the issues of a single immigration policy, xenophobia and Islamophobia. We tried, promoting dialogue and diplomacy, but we did not find the response we expected. They resorted to distraction tactics against us, while the Union was held captive by some of its members. On the issue of immigration, we can not expect the pressure to be reduced without resolving the issues between Turkey and Europe. It is necessary to put an end to push-backs and anti-immigrant tactics that do not comply with international regulations. Today, more than 4 million Syrians have returned and are living in their regions, thanks to our efforts”, Erdogan said initially.

He continued, referring to Greece and the Cyprus issue: “During last year, we made great efforts to reduce tensions with Greece. We activated most of the dialogue mechanisms, we made a special effort to reduce the tension, we agreed to develop our relationship, to focus our attention on the tourism agenda, economic and trade cooperation. I believe that, as two neighboring countries, we will resolve our differences through direct and constructive dialogue. Turkey’s stance on the Cyprus issue is clear. Greeks can not get rid of the mentality according to which they are the only owners of the island. Unfortunately, the European Union, while blindly acting as a representative of the Greek side, is violating the rights of the Turkish Cypriots, who are an integral part of the same geographical area. We continue our efforts to resolve the Cyprus issue. The time has come for the EU to see things with honesty: if it wants to contribute to resolving the issue, it must meet its 2004 commitments, recognize the existence and will of the Turkish Cypriots, and appreciate the solution we proposed in Geneva”.

The Turkish president also spoke about the prospect of Turkey joining the EU, saying: “We have been trying to join the EU for more than half a century. I have talked to many leaders in the EU for over 20 years. Personally, I saw the way they blocked the steps we took. We are committed to the goal of full integration. Despite the injustices we face, the EU remains our strategic priority and we continue to work in this direction. We are ready to strengthen dialogue and cooperation with the EU. We hope that the Union will get rid of its strategic short-myopia in 2022 and will work to improve its relations with Turkey”.

Zoran Zaev: We will enter the EU as ‘Macedonians’ with our ‘Macedonian’ language