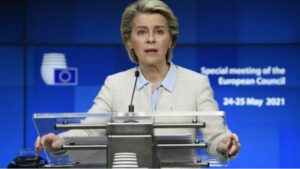 The President of the European Commission, Ursula von der Leyen reiterated the EU’s firm position that it will never accept a two-state solution for Cyprus during a press conference she gave to the European Parliament in Strasbourg on the occasion of the assumption of the Slovenian Presidency EU.

Asked about Turkish President Recep Tayyip Erdogan’s upcoming visit to the occupied territories, the Commission President said she had recently spoken over the telephone with the Turkish President and conveyed a very clear message about his visit.

“I told him that we are very sensitive in this matter, that we will monitor the progress of this visit, and that it is absolutely clear that the EU will never accept anything that refers to the two-state solution,” said Ursula von der Leyen. She stressed that the Turkish President is well aware of the EU’s position and stance on this issue.

The Race Towards Full Vaccination (infographic)

Rafaela Kara: Her body in a popular pilgrimage – Her last wishes

Mitsotakis at the Summit: Joint gas supply for the whole EU (video)

PM Mitsotakis: Any upgrade of Greece’s defence is projection of peace

The “Blue Homeland” theorist blames Greece for the fires in Turkey

Mitsotakis urges Greeks: Get vaccinated as soon as possible