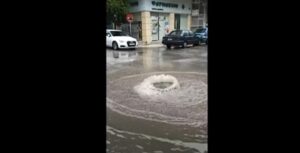 Greece has been battered by extreme weather, as the country faced two severe weather systems back to back, “Athena” and “Ballos”, the latter still affecting the whole country.

Attica saw a huge volume of rainfall, resulting in serious problems in transportation and power outages, while holes popping up in the asphalt. In one instance, the water is swirling around over a manhole in the area of Kalithea, Athens.

According to the records of the National Observatory of Athens in many areas of Attica in the last two days, more than 170 mm of rain fell, which is triple the time amount usually falling in the whole of October.