Experience honors and glories. History was written in his corridors and high-ceilinged rooms. 1983 was printed on a banknote worth 450 drachmas next to the first governor of Greece, to remind him of his birthplace and the house where he was born. The reason for the mansion of Ioannis Kapodistrias, known as the Kapodistrias mansion, which has its current form, from 1832, one year after the death of the first Governor of Greece.

It was built around 1832 on the site of the family's oldest mansion. It bears the architectural stamp of the then known to the whole western world, the Corfiot architect Ioannis Chronis, who was also a close friend of Ioannis Kapodistrias. 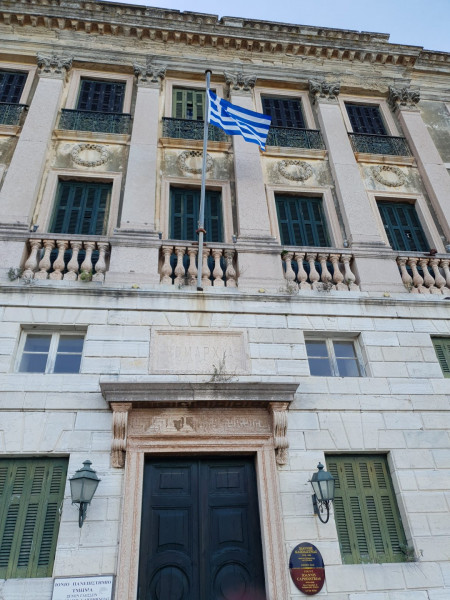 It is located in a “key” location of the Old Town, on the upper perimeter front of Spianada – Mouragion – Port, at the beginning of Mitropolitou Arseniou Street, in the Mouragia area, a stone's throw from the palaces of Agios Michael and Georgiou, overlooking the Old Fortress, Faliraki and the endless blue of the Ionian Sea.

This is a tall stone imposing building, “part” of the three-dimensional balanced , a building complex of the area, with neoclassical features and elements of the late Athenian urban classicism.

support the pedestals on the roof of the building, while the walls are decorated with stone wreaths.

The whole building has a monumental classicist character.

Kapodistrias mansion was built in the years of the British ” protection “of the island, by his younger brother Ioannis Kapodistrias, George.

The property became the property of the State and served as the seat of the President of the Ionian Senate . 1864, after the Union of the Ionian Islands with Greece, functioned as the Prefecture of Corfu, while from 1983) initially housed KEMEDI and later the Department of Translation and Interpretation of the Ionian University.

Today its wooden shutters may have been “eaten” by the sea breeze brought by the wind, but great events that marked this place forever close in, making the Kapodistrias Palace not only a unique architectural masterpiece, but also a monument of the history of Corfu.

Drama Festival – Travels to Athens and the Greek Film Archive

Skopelos – Agios Riginos and the most important monastic complexes

Helena Paparizou performs “My Number One” at Eurovision 2021 (VIDEO)