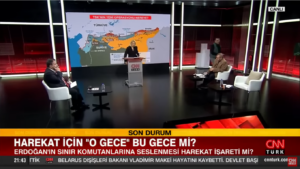 The Turkish pro-government network CNN Turk continues to cultivate an anti-Greece climate, taking aim at Greece’s seismic surveys for gas exploration that began south of Crete and hurling threats such as: “Something sudden can happen in the Aegean too”, on the occasion of the Turkish military campaign in Syria.

The reportage on CNN Turk speaks of a “step that will escalate tensions with Libya”, commenting on the new Navtex for the expansion of ExxonMobil’s seismic surveys south of Crete. The report defiantly claims that the Greek explorations are encroaching on the Libyan EEZ, stressing that the aim is to cancel the illegal Turkish-Libyan pact.

“A step that will escalate the tension with Libya was taken by Greece. Athens announced NAVTEX breaching Libya’s exclusive economic zone. It extended the fossil fuel survey areas in the direction of the coast of Libya (…) It is believed that Greece with this step aims to gauge the reaction of the Government of National Accord of Tripoli”, the report states.

Speaking on a program of the same television network, the journalist Ismet Özcelik – and on the occasion of the military operation in Syria – directed his fire against Greece, threatening that: “Something sudden can happen in the Aegean too”.

The Turkish journalist pointed out that Turkey’s “decisiveness” in Syria is a “message” for Greece, which – according to him – disturbed our country.

What is the agenda for the Eastern Mediterranean?

Mitsotakis from the EU Summit: Turkey must be aware of the consequences of its choices (video)