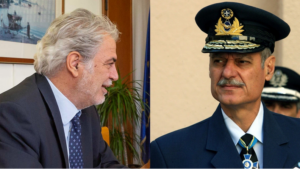 Christos Stylianidis has served as Commissioner for Humanitarian Aid and Crisis Management.

Evangelos Tournas, who will have the operational responsibility. Mr. Stylianidis is 63 years old, has studied at the School of Government at Harvard University and in the past has been elected MP and MEP with the Democratic Alarm party in Cyprus. Earlier, while studying in Greece, he had relations with the Youth of the Communist Party while later in Cyprus he was one of the young politicians from the Center-Left, as he had collaborated with the late Giannos Kranidiotis in the effort of Cyprus’ accession to the EU.

Evangelos Tournas, a very experienced pilot with over 4,000 flight hours in fighter jets, will be in charge of the firefighting part. He served as Chief of the General Staff of the Hellenic Air Force (HAF) from March 7, 2013 to February 27, 2015. He was born in Chania and entered the HAF Academy (Icarus School) in 1976.

As is known, the prime minister had proposed to Admiral Apostolakis the ministry, which, although initially accepted, later declined the offer after SYRIZA’s reaction.

Atilla II: 47 years since the second Turkish invasion of Cyprus

Did Turkey sell the bones of slaughtered Greeks & Armenians for industrial use?