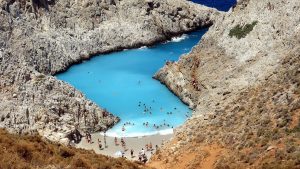 Greece is one of the most sought after holiday escapades for the Brits, according to a survey conducted, as 33 per cent said they were dreaming of going Greek island hopping, once travel was allowed.

The survey was carried out on a sample of 1,000 British travellers, according to which people planning a vacation to a new destination do it to for a change of scenery (44%), with one-fifth (20%) reporting that the lockdown made them look forward to exploring new places. 17% said that last year was used to save money in order to take a separate vacation as soon as it becomes legal.

Before the pandemic, 53% of respondents said they used to make a trip abroad to the same destination, either because they had a home there, or relatives and friends (22%) or because they liked intimacy (19%). One in 10 (7%) even stated that they did not like the destinations unknown to them. Now the percentage of those who want to travel to a place where they are used to is around 5%.

In detail, the most popular experiences that I would like the British to have from their holidays as soon as they are allowed to travel abroad again, are …

Two Greek islands in best-hidden of the Mediterranean: Telegraph

Four magical beaches in Lefkada you must visit (photos)