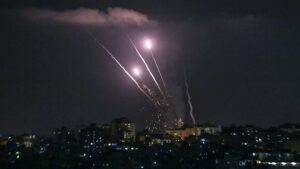 British Airways, Virgin Atlantic, Iberia, and Lufthansa today cancelled their flights to Tel Aviv as European airlines are following the example of US carriers and are suspending flights to Israel amid escalating conflict in the region.

“The safety of our colleagues and customers is always our top priority and we continue to monitor the situation closely,” British Airways said after cancelling flights to and from Tel Aviv today.

The British-based Virgin Atlantic cancelled its flight to the region late yesterday, Wednesday, and announced that it is considering whether to make the flight scheduled for tonight.

The Spanish airline Iberia also cancelled flights to Tel Aviv today and tomorrow, according to a spokesman, who added that the airline will decide on future flights depending on the situation.

The German company Lufthansa announced today that it is suspending all its flights to Tel Aviv until tomorrow, Friday 14 May.

“Lufthansa is closely monitoring the current situation in Israel and continues to be in close contact with the authorities, security providers, and our staff there,” the company said in a statement. Lufthansa said it expects flights to Israel to resume on Saturday, May 15.

Virgin Atlantic announced earlier this week that bookings for Israel jumped 250% on a weekly basis following Britain’s announcement that Israel was on the ‘green list’ of resuming overseas travel for leisure reasons during the Covid-19 pandemic.

However, the outbreak of violence, with clashes in Jerusalem and the Gaza Strip causing more and more civilian casualties, has caused airlines to be wary of the region.

The British company EasyJet announced that it has not yet cancelled its flights to Tel Aviv. Its next flight is from Berlin and there is no scheduled one before May 16, while the flight from London Luton Airport to Tel Aviv is scheduled for May 18.

“Of course we will continue to monitor the situation,” said an EasyJet spokesman.

The Most Dangerous Airspace To Fly Through (infographic)

Passenger traffic in Greece “took off” in August – 82.6% increase in international arrivals