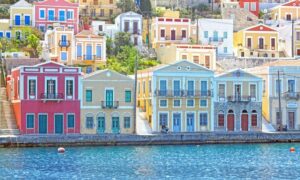 Symi, one of the entire Aegean Sea’s most elegant islands, as well as one of the most impressive among the Dodecanese islands, is situated 12 miles northwest of Rhodes. Its beauty could be likened to that of the Italian Riviera.

The island’s architecture, represented by some 2,500 multi-coloured neoclassical houses, is distinctive. These houses, among the country’s first to be listed, resemble sets from classic Marcello Mastroianni films.

Symi’s distinctive character helped protect the island from rampant, often unregulated, construction activity witnessed on other Aegean Sea islands during the tourism industry’s boom in the wider region. During this period, Symi remained unknown, attracting insightful visitors from various parts of Europe, as well as Greek pilgrims drawn to the island’s Panormitis monastery. More recently, however, the island has been discovered by a new wave of sophisticated, international travellers.

EC: Greece’s emergence from enhanced surveillance critical for both Athens and Brussels

French journalist killed in Ukraine after being ‘fatally shot’

The beaches of western Lefkada – An ode to endless blue

Greece: Plan for the promotion of military tourism