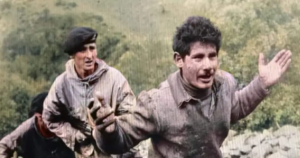 The EOKA fighter Augustis Efstathiou, who was an emblematic figure of the Cypriots’ struggle for Union with Greece, passed away on Monday, at the age of 88.

Efstathiou was a freedom fighter of EOKA and was a member of Grigoris Afxentiou’s group in Mahairas Monastery, until the day of Afxentiou’s sacrifice, who was burned alive in his hideout by the British.

Shortly before the attack by the British, Augustis Efstathiou together with his other three competitors, Phidias Symeonidis, Andreas Stylianou and Antonis Papadopoulos, were ordered by Afxentiou to leave the hiding place, because he himself had already taken the decision to be sacrificed for the cause of the Cypriot Union with Greece.

The - is from the time of Efstathios’ exit from the hideout.

Akar’s new inflammatory statements: Turkey has the right to self-defense in the Aegean

Greek Minister: Market opening delayed so long as the pandemic is ‘in full gallop’