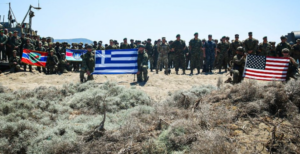 At the dawn of the Cold War, President Harry Truman argued in favor of major security investments in Greece and Turkey, suggesting that an investment in regional security would pay dividends for American security. 75 years later, anti-American communists in Greece still chafe at the American presence in the country, but both Athens and Washington have sought to deepen military relations this past half-decade. This contrasts with Turkey, which has been an exceptionally difficult ally of late.

In this context, it is worth considering how the Russian invasion of Ukraine has prompted the Biden administration to devote considerable time and re-s to thinking about European security. Of course, this is also unfolding as negotiations with Iran over the future of its nuclear program falter and threaten to collapse, which could lead to cascading military challenges across the Middle East. This is a problem set that inherently requires tradeoffs given Washington’s prioritization of competition with China and the simple fact that the U.S. military has a finite number of platforms and personnel to meet America’s global commitments and interests. So, how can Washington best balance security interests in Europe and the Middle East while still prioritizing the Indo-Pacific?

The answer might be found in deepening the military partnership with Greece, one of Washington’s most consequential allies, as well as the Republic of Cyprus. Specifically, Washington should consider taking advantage of current basing and access agreements in the two countries and think creatively about how to deploy and employ U.S. and allied forces in order to realize more stability in Eastern Europe, the Middle East, and Africa.

Paris to Berlin in an hour: Welcome to the future of high-speed rail travel in Europe

This process has already started, but the United States should lay the groundwork to expand the scope of the forces deployed in Greece and work with Athens on a shared understanding of how to hedge against the Russian naval presence in an integrated approach with broader U.S. and NATO efforts in the Black Sea region. Further, the two sides should leverage Greece’s improved ties with the Arab world to conceptualize how American forces in the country could respond to crises in the Middle East and North Africa, thereby leveraging Athens’ strategic location for American interests outside the European theater of operations.

Read more: War on the Rocks

Biden preparing to declare that atrocities against Armenia were Genocide