Standing up, almost naked, she averts her gaze from the horrible signs of decomposition in her body, while worms walk on her belly. It is the stone Ioanna of Bourbon – Vadom (1511 – 1511)), Duchess of Bourbon, standing opposite the dead Jean Paul Mara.

Both of them do not escape the watchful eye of a portrait with an elaborate headdress by Marie Antoinette, next to which is one of the most famous men in world history: Napoleon through his funeral mask – one of the 11 plaster that had been bought by King Louis Philip and was a popular decorative object in the urban living rooms of the Julian monarchy. In a short distance, but in the same company, one can meet the first legislator in history, the Babylonian king Hammurabi, Alexander, Voltaire, Diderot and Balzac, but also Elizabeth Vize Le Bran, the pioneer portrait painter. of Marie Antoinette and Catherine the Great. 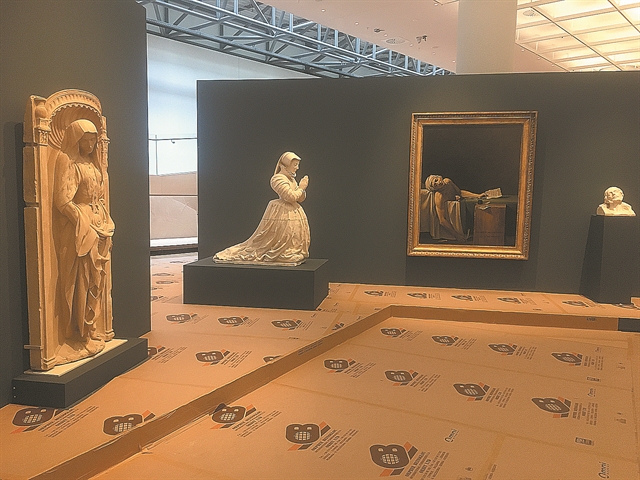 Miscellaneous persons who do not belong to the same pages of History. Their portraits, however, endured as much as their backwardness. However, some forms of anonymous people have penetrated among them, whose image was so strong that it overshadowed the fact that their identity remains unknown. Two threads make up the invisible thread that connects all these portraits: many of them bear the great signatures of creators such as Botticelli, Veronese, Domenikos Theotokopoulos, Velasquez, Rembrandt, Goya, David, Engrun, and all of Delacroix of the Louvre.

And these are the 100 which compose the exhibition “The art of portrait in the Louvre collections”, which inaugurates the 2. sq.m. “This is an idea that started four years ago with the then director of the Louvre, Jean-Luc Martinez, and he embraced it with enthusiasm,” he says of the first large periodical exhibition of the National Gallery Marina Lambraki – Plaka. “The curators of the exhibition – Lidovic Lozier, curator of Greek, Etruscan and Roman antiquities, Com Fabre, curator of the Louvre's painting, Efi Agathonikou, director of collections at the National Gallery, and Katerina Tavantiriki of works, but a thematic organization of the material, based mainly on the social function of the portrait in each era “.

In the new basement of the National Gallery, which has natural light from the ceiling, the image yesterday resembled a construction site: cardboard on the floor, showcases with sculptures and others on which the works had not yet been placed, as a result of which they were turned into temporary shelves for projectors waiting to be hung in the appropriate places, paintings and small works, coins, jewelry and plaster masks without information signs caused the eye to guess who the person depicted or the creator is and how they fit into the rationale of the exhibition.

They steal the show

Even this image of the creative mess, however, does not It could distract attention from the beauty, the originality, the calmness of the idealization and the power of realism.

And it is difficult for the visitor to distinguish which works steal the show. The iconic portrait of Maria-Annas of Austria, Queen of Spain, produced by the workshop of Diego Velasquez, or that of the Marquis de Pompadour of François Bouce? The man in the red hat – one of the characteristic creations of Sandro Botticelli -, the stern Antonio de Kovaroumbias painted on his canvas by Domenikos Theotokopoulos, the melancholic young artist in his studio from the circle of Teodor Zerikos, the duke of Oro a portrait of Jean-Auguste Dominique Engre or perhaps the monumental work starring Mrs. Mercier, surrounded by her family, the caretaker of Louis XIV, who cared for him when he was crowned king at the age of five?

In any case, it is worth paying attention to the less prominent but with special stories exhibits, such as the cigarette case of Louis XVI, a box created by 1783 and is accompanied by a collection 25 of porcelain portraits , which are repositionable (and the owner can change them) on the lid of the box. One of the most beautiful funeral portraits of Palmyra, in which the blue color is preserved in the eyes of the limestone sculpture of a female portrait sculpted between him 100 and 300 AD

And the special bust with which the exhibition closes, made of an alloy of lead and tin, in which a man is depicted completely bald, with his eyes closed, his mouth sealed with tape, his face deformed by a strong inner , extremely painful explosion. This is a project (1783) – 1771) by Franz Xaver Messerschmitt, who, persecuted by his demons, grimaced and stung himself in front of a mirror to neutralize the influence of the spirit on him and transferred his expressions to 100 busts with the greatest possible accuracy.

In the “hammer” rare letters of the Beatles

Hilton Valentine: The co-founder of The Animals has died