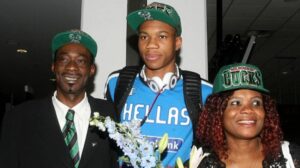 Throughout his career, Giannis Antetokounmpo has shown that family comes before everything else. “I would give it all up, without a second thought! Take it all back. I would go back to Sepolia selling CDs to have my father back,” said Giannis in an interview with a basketball show on Cosmote TV.

The first thing he did as soon as the series against the Phoenix Suns was over was to run to hug his mother, Veronica, and his partner, Maria, with his son, Liam-Charles.

Once the interview turned to how he sees family and his father, he responded he was willing to sacrifice everything to have his dad, Liam-Charles back.

Talking about the Greek national team he said: “I hope I am healthy and to represent Greece in one year! I do not want to put pressure … I want us to go and have fun … You do not play in the National either for money or for anything … You live to hear people say to you “you gave us joy that we won … When you have not won, you do not understand this … I went to the Bucks parade and we saw 200,000 people, all of them with a smile. Can you imagine giving joy to 10 million people? I want to be well in 2022, I really want to do it.

PM Mitsotakis on Turkey at UN: We are living under a constant threat of casus belli (full speech video)

Media: Greek tourism on course for a new record in 2022