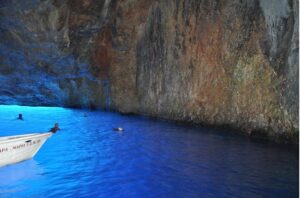 At the south-eastern edge of Kastellorizo, the island of the Dodecanese also known as Megisti, an otherworldly cave resembles a dreamscape, bright blue and almost below sea level.

It is called Galazia Spilia (blue cave), but the locals also call it Parastas’ or Fokialis’ Cave, and it is a true geological wonder, and definitely the most famous sight on the island located at the edge of the Greek sea borders. To enjoy its magic to the fullest, you need to get there early in the morning, for a truly unforgettable swim, when the sun is still low in the sky, sending its warmth and light through the cave’s narrow opening.

The “unknown” Kastelorizo cave has been receiving increasingly more visitors in recent years and has gained fans from all over the globe. At 35 m high, 40 m wide, and 75 m long, it’s much larger than the famed Grotta Azzurra in Capri, Italy, one much more well-known aquatic masterpiece of the Mediterranean.

Temperatures over 30ºC in Greece over the next days

The underwater village in Crete that resurfaces (video-photos)