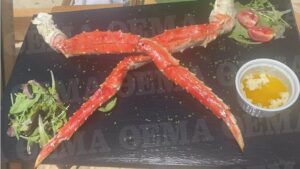 An American tourist in Mykonos shared her experience on social media of how she had to fork out a whopping 600 euros for two cocktails and a portion of crab legs.

The American tourist sent to her travel agent the plate with the crab legs that was served to her in a restaurant in Platys Gialos, accompanying the - with a caustic comment against the managers of the company.

“I believe they decide how much they charge when they send you inside at the end of your meal,” the American tourist said in her message to the travel agent. She continued: “By the way – here is what we had – two drinks – which were in a large but almost all ice, and juice with little alcohol”.

According to the tourist, the waiter who served them, said that the cocktails cost 25 euros each, however, he never brought the detailed bill to find out exactly what they were charged. She claimed that the people in charge of the restaurant also charged her a tip of 78 euros, without her approval. “I was told I owed 600 euros for two cocktails and a portion of crab legs and then I saw the receipt that they had charged 520 euros and the rest they charged as a tip, without telling me,” she informed the travel agent who had arranged the trip and accommodation in Mykonos.

The oldest olive tree in the world is in Greece

Visit enchanting Anthochori to travel into a fantasy world