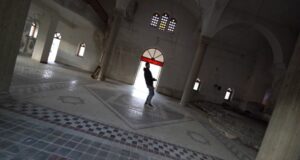 A team of urban explorers visited an incredible crooked church slanted 17 degrees. Adventurers Bob Thissen and Frederik Sempels visited the bizarre construction in Ropoto, Greece, and filmed a video of it that has gone viral with thousands of views.

Ropoto is an abandoned town that was deserted following a landslide in 2012, and incredibly, its church still stands, although it is more crooked than the Tower of Pisa. Bob and Frederik filmed some hilarious footage as they explored the building while standing slanted.

Residents were forced to flee the once picturesque village of Ropoto, in central Greece in 2012 after a landslide caused many homes to slip down the mountain and crack.

Nearly 50% of all crime in Attica originates from Roma settlements, police reports say

No end in sight to ‘gigantic bottleneck’ for global freight, shipping titan warns

The Crusader castle of Chlemoutsi in the Peloponnese

Greece is one of the most popular destinations in the world: Der Spiegel