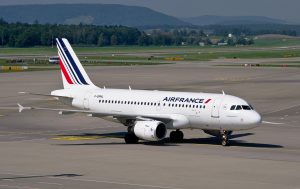 French airline company Air France will be increasing the number of flights to Greek destinations for the summer, according to an announcement released.

The initial planning of the summer program to Greece provides for six destinations outside Athens, in order to strengthen the connection between the two countries. The destinations that have been included are Thessaloniki, Mykonos, Santorini, Corfu, Rhodes, and finally, Heraklion. The new flights will depart from the Charles de Gaulle Airport in Paris.

An ‘absolute plague’ of mice is ravaging eastern Australia

For the route to Santorini, there will be a choice of four flights from May 31 to July 4 and only one flight from July 14 to August 25. Heraklion, Crete will be served by flights, which start on April 17 and will last until October 30, while they will take place every day from June to August.
Finally, Corfu and Rhodes are part of the destination program for July and August with four flights available each week.

Fin Min: There will be a new package of support measures for Greek firms

US Secretary of State Blinken: Turkey is an old and valuable ally