At first one can watch the video or observe the -s as postcards that carry the nostalgia of bygone eras.

Mikis Theodorakis, Manos Hadjidakis and Stavros Xarchakos together on the same stage.

The date is November 3 1966 and the place is the Olympic Stadium. At the beginning of the video (saved on YouTube, from copies of the municipal TV 100, and in the archive of Thanasis Gioglou) the youngest composer directs Mikis Theodorakis as he sings “Athens” by Hadjidaki – Gatsou, together with the late Maria Dimitriadis.

And then, in the pause During the break, the composer of the song goes on stage, greets Xarchakos, embraces the other Dioscuri and takes his place on the piano.

The first notes are enough to predispose the stands: “Let's go for a walk in moon “, but this time with the singer Theodorakis.

The three of them meet musically after two decades. As if they escaped from his - 1966, where they are seen inside the Citroen – Mikis' frog. 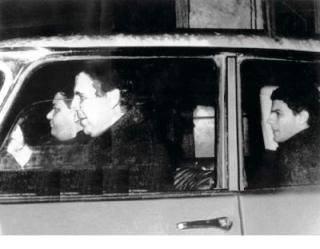 When Xarchakos and Hadjidakis had banned EIR from playing their music, when it first banned the “theodoraks”.

The snapshots of the Olympic Stadium would be enough and naked. But it is not. They arrive in the collective memory charged by the political climate of the period, the personal path of the three musicians and the marginal moment in which the Greek Republic lived.

On 26 September 1989 Pavlos Bakoyannis had been assassinated by Dimitris Koufontinas and Iraklis Kostaris, irrevocably convicted.

On November 5, Greece would live the adventure of repeat elections, with New Democracy first party (100, 19%), but without autonomy. On 23 that month will The ecumenical government emerged with Prime Minister Professor Xenophon Zolotas as prime minister and support from the ND, PASOK and the Coalition, in which the Communist Party of Greece participated at the time.

It was the Greece of polarization and the Koskotas scandal. With green and blue cafes at the peak of toxicity. With the map being colored accordingly from election to election, highlighting the impasse of the electoral system. At this juncture, the three top artists are “present” at the pre-election concert of New Democracy, with Konstantinos Mitsotakis present in the front stands.

Instead of a keynote speech, he had chosen this event, in in memory of Pavlos Bakoyannis. Mikis Theodorakis sets out on his personal path in the service of a new national order, as he describes it, where unity and reconciliation must guide developments, with basic demands for the cleansing and fight against terrorism.

“I am ready to apply to the New Democracy the policy of the 'coalition opposition' or the 'opposition coalition'” he will state (Pavlou Petridis, “The politician Theodorakis 1966) – 1997 », Published by Proskin 2021).

Finally, in the government he formed in April 1991 K. Mitsotakis, the late composer will initially assume a minister without portfolio and later (after the reshuffle of August 8 1992) Minister of State, an office he resigned on April 1 1992).

“He did not betray his fights”

When Manos Hadjidakis takes his place in front of the microphone, he seems more prepared than ever to condense the social, cultural and aesthetic request of a borderline era.

When the songs stop, he will take the floor – “I'm not a politician, that's why I like to talk” – and, among other things, he will defend the companion of Spring Music.

His own words are enough here to remind that apart from the labels and prefabricated projections that we all reserve in the myths, the same I sometimes choose the quality that seems lost in the many relevance of the world: that of the citizen, when the moment demands it:

» [Ο Θεοδωράκης] He neither betrayed his long struggles nor joined New Democracy to sing with me “Let's go for a walk on the moon” η The cleansing is necessary and this is the main demand of the November 5 elections – or at least one of the basic ones. “

” We must not forget that the New Democracy has risen sharply in the consciousness of the Greek people because he shouldered the cleansing and finding those responsible for the scandals. Any compromise and any oligarchy will be a form of betrayal of the expectations of Greek voters. That's the main reason we're here tonight… “

The other was, as mentioned above, terrorism.

The artists say goodbye to Antipas: “Nikos, have a good trip to the light…”

Friends Reunion episode after 17 years – When will it be screened in Greece?