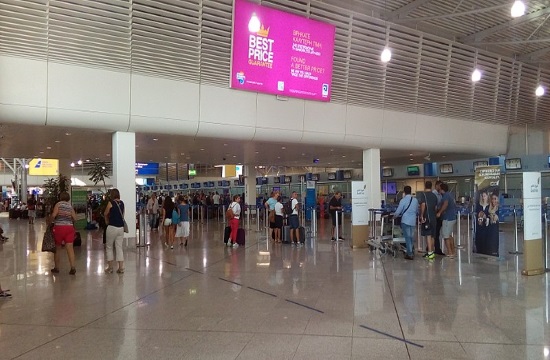 The aviation directives calling for a seven-day quarantine of airline passengers from abroad and a restriction of international flights have been extended until Monday, February 8, 2021, while under the new directive there is no limit on the number of travelers arriving from Israel, ANA reports.
In particular, the Civil Aviation Authority (CAA) on Friday announced a new directive (NOTAM) concerning Israel, without the weekly limit of 10,000 passengers provided by the previous aviation directive for this country.
As far as international itineraries are concerned, with the aim of protecting passengers and citizens, the following international air traffic directives are extended and valid from Friday at dawn until Monday, February 8, 2021, at midnight.
Seven-day quarantines for all arrivals from abroad: All passengers entering Greece up until February 8 at midnight, from any foreign country, including the member-states of the European Union, are subject to mandatory precautionary confinement to their home or the temporary residence they have declared in their Passenger Locator Form (PLF) for seven days, unless their stay in Greece is for a shorter period, in which case the temporary restriction is valid until the time of their departure. Also, foreign passengers may be subjected to a rapid test upon arrival, based on the procedure provided by the PLF. If the passenger tests positive, the mandatory period of quarantine is extended to 14 days.
For arrivals from the United Kingdom, in addition to a seven-day quarantine and rapid test, they must also provide a new negative PCR test at the end of the seven-day quarantine in order for this to be lifted. Rapid tests will be carried out on all passengers on flights from the UK upon arrival.
International arrivals are only permitted to enter if they can display a negative test taken in the previous 72 hours. The NOTAM stipulates that all passengers on international flights can only enter Greece if they have a negative PCR test and may also be subjected to a random rapid test upon arrival, based on the PLF.
The aviation directive extends the requirement for mandatory completion of the PLF at the electronic address https://travel.gov.gr/ by all passengers on international flights to Greece. Filling in a PLF is also mandatory for passengers on foreign flights who are permanent residents of Greece and depart from the airports of Greece.
A suspension of flights between Greece and Turkey and between Greece and the region of Catalonia in Spain is extended.
All flights to and from Greece from Albania and North Macedonia, according to the new extension of NOTAM, will be operated only at AIA “Eleftherios Venizelos.”
The aviation directive extends a ban on the entry of non-European citizens (Non-EU Citizens) into Greece. Israel and Russia were added to the exempted countries in the aviation directive, bringing the total of 11 countries exempted from the entry ban to Greece to 11. In particular, the NOTAM excludes residents of the following 11 countries: the United Kingdom, Singapore, Australia, Japan, New Zealand, Rwanda, South Korea, Thailand, the United Arab Emirates, the Russian Federation, and Israel.
Especially for Russia (permanent residents), the following restrictions remain Arrivals only at the airports of Athens, Thessaloniki, and Heraklion and a maximum entry limit of 500 passenger arrivals per week.

Foreign media on the death of Mikis Theodorakis