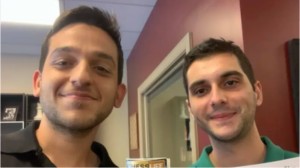 Another great success was noted by the Rethymno chess player Nikolas Theodorou. Nicholas is a chess player who constantly surprises with his successes.

This time, however, the success is such that it goes beyond the borders of Greece and is one of the biggest goals set by an athlete in chess.

Winning the title of grand master in chess which is the highest title that exists is not something simple. The proof is that only 11 players from Greece have conquered it.

Nicholas at an international event held in South Carolina in the United States of America excelled with his appearance winning the 1st place in the tournament.

At the same time, however, he collected the necessary percentage he needed to get his third Grand Meter norm, which was the last one required to win the title.

21-year-old Nikolas Theodorou is the first chess player in Crete to achieve this title.

“Congratulations Nikolas and once again we wish you every success in your goals and your dreams come true”, was the wish of the Rethymnon Chess Club.

10,858 new Covid-19 cases and 76 fatalities recorded in Greece on Thursday

Bangladeshi woman stabbed to death in downtown Athens by compatriot